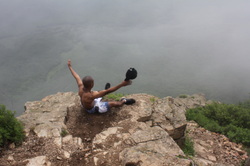 I can’t believe I climbed my first mountain in China !!! Lets just say that climbing a mountain in America compared to China is no where near the same. I will admit this was the most intense thing I have ever done. Safety was a concern for me.  The mountain was very steep and was raining at the same time! overall it was a great experience, wouldn’t trade it for anything! : )
Hello, Ill first start out by saying this experience is beyond amazing. When I first arrived in china I didn’t know what to expect. My first culture shock experience was when I arrived at Beijing airport, everyone starting staring at us like they have never seen another skin color besides their own. After an hour in Beijing, we then flew to Harbin airport. The plane ride took two hours, but by that time we were all exhausted due to previous flights. When we arrived in Harbin, we met our Chinese tutors for the first time. My Chinese tutor name was Tian chou.  He spoke very little English but we understood each other pretty well. After we everyone arrived in Harbin, we drove to Harbin institute of technology. There my adventure began. Our teacher gave us a tour of our campus. We then went to a culture class that talked about Harbin’s culture.  I never knew that Harbin had so much Russian influence. After the culture class we ate lunch at a nearby cafeteria. I ate mash potatoes and spicy chicken. I immediately noticed that the food didn’t taste the same as American food. But overall the food was great! After we ate, me and my tutor we shopping at the local grocery store. I bought house shoes which appeared to be a Nike brad, but soon enough when I got to my dorm, I noticed that the nike brand was really nife. I thought that was pretty funny. After I was all settle in I went exploring on my own. Everything was aliitle overwhelming. The campus wasn’t at all what I expected. My room was also very different from what I expected. When I took a shower, we only had three minutes of hot water. Our rooms were freezing cold, I slept  fully clothed every night. I didn’t understand why they didn’t want to turn on the heat. Taking cold showers and stepping out into a cold room wasn’t a good mix. Overall, I told myself that this is china, and I have to be flexible. I would never take back any of the experiences that I have had. Harbin will always be my home in china.
2011年7月18日 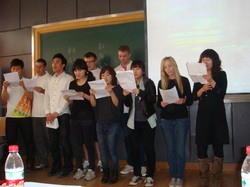 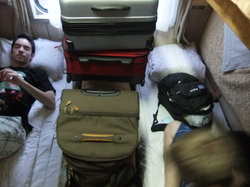 As we said our goodbyes to Harbin, little did we know how much chaos would ensue as we headed for the train station. Right from the beginning of this journey to the train our situation looked bleak.  With everyone carrying enormous amounts of luggage, we needed a big bus to get us from the dorm to the station. Unfortunately, that big bus turned out to be a pretty small bus with little storage space and an even less helpful driver.  But our group had persevered through China’s oddities for over two months, so this angry bus driver and his small bus we’re not going to stop us from reaching the train.  After finally shoving our luggage between the aisle of the bus and squeezing ourselves on there as well, we were off to the station. But our troubles would not end there. The Harbin Train Station was full of hundreds of people and we had to snake our way through will all of our luggage.  To make matters worse, one of the wheels on someone’s luggage completely fell off, so they were literally dragging their suitcase against the ground! When we finally made it to our train car sweating from head to toe, we were devastated to learn that our luggage had to be placed in the same tiny compartments we were to sleep in! Other Chinese travelers looked on in amazement as we piled our luggage into our compartments and tried to figure out how to arrange everything. We eventually got all our luggage in, piling stuff on the table, on the ground, and in overhead storage areas. This situation really showed how much we all came to trust each other over these past two months and rely on each other for help, because it took a lot of teamwork to get everybody from the dorm to that train. This was definitely an experience I will never forget.
–7/14, Kelly
我学到了很多中国文化 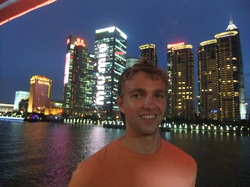 Tutors, 语伴，lifesavers, friends. These are all words we often would use to describe our language partners at HIT. The tutoring system during our time at HIT was set up on a 2 week schedule. This was sad because we would meet a new friend and then we would have to switch to a new tutor.At the same time it was very nice and gave us a lot of opportunities to meet new people. The tutors at HIT really welcomed us with open arms and looking back it was very nice to have them around those first few weeks here in China. All of them were very nice and easy to get along with. They were never too shy to correct our Chinese or help us with our homework. I know often times after our 2 hour tutor session, I would often find myself just chatting with my tutor for another extra half an hour. The tutor pictured here to the right is my good friend Die Bin. I know I speak for most of us who went on this trip, Die was a blast to hangout with. He would often just randomly come over to our room and help us with our Chinese homework. He would teach us new vocab and go out to dinner with us. I know for certain that Die made my transition to life in china a whole lot easier!